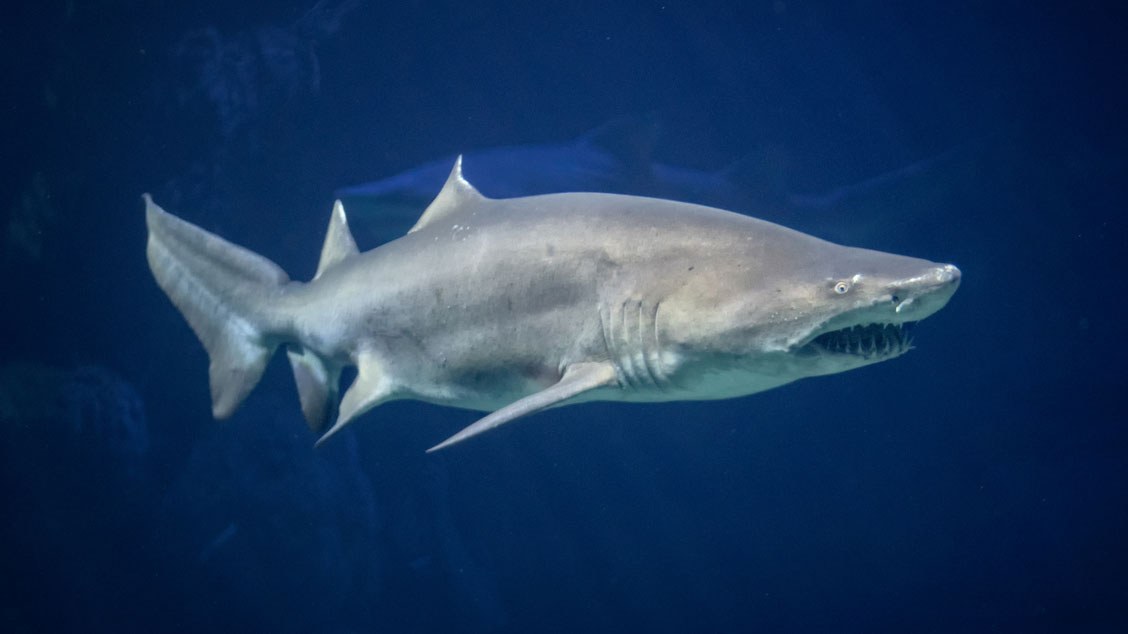 Belonging to a group of sharks known as ram ventilators, sand tiger sharks need constant movement to pass water over their gills to breathe. To conserve energy, they often find fast-moving currents to help them breathe.

Like all sharks, the sand tiger shark is a cartilaginous fish, meaning they do not have a bony skeleton. They weigh around 200 lbs. and can grow to between 6 and 10.5 feet. The sand tiger shark has a strong, thick light brown-to-gray upper body that begins at its short upturned snout, where three rows of long razor-sharp teeth protrude from its mouth. This toothy "grin" gives this species its reputation for being fierce and frightening. Its body gradually fades to a white ventral (belly) side and tapers in shape at the tail, which has a notched fin on the underside.

Reproductive Behavior
The breeding season in the Northern hemisphere is generally from late summer (August) to December but ends in October in the Southern Hemisphere.

The courtship between a male and female can go on for days after the male has successfully chased away any competing males. Courting consists of them giving each other lovebites by nibbling on each other's caudal (tail) and pectoral fins. When the male senses his partner is ready, they will mate. Interestingly, though they put on quite the dating show, a female will mate with multiple males in a season.

Around 16-23 embryos will begin to develop in each of the female's two uterine chambers. Within 8 to 12 months the eggs will begin to hatch internally. However, all but one in each chamber will be cannibalized by the largest and strongest of them. This means that only one or on occasion two will survive to a healthy live birth. Sand tiger sharks reproduce only once every two years or three years and have the lowest reproductive rates and high infant mortality rates.

Are sand tiger sharks dangerous?
These sharks are not aggressive unless provoked and feel threatened, though their appearance, size, and ferocious-looing grin are intimidating. There are accounts of sand tiger sharks stealing fish right off a fisherman's spear underwater. There have been stories of sand tiger sharks harassing divers, but actually very few records of unprovoked sand tiger bites on humans, none of which were fatal.


How do they communicate?
While sand tiger sharks lack vocal cords and are incapable of making sounds as we do, they are thought to communicate through visual and sensory perceptions. They can detect weak electric fields in water with electroreceptors that help in sensing objects that are nearby. Their later line helps feel vibrations in the water. They also appear to arch their bodies in an attempt to communicate with other sharks.

Did you know?
This species has a very unique adaptation that helps with buoyancy. It swims to the surface and actually gulps air! This in effect turns their stomachs into pockets of air and allows them to remain motionless while hunting at greater depths. Sand tiger sharks are the ONLY shark species capable of this.

Habitat
Sand tiger sharks prefer warm water and thrive in subtropical and temperate oceans, including the Atlantic, Indian and Pacific oceans. Their range extends from Argentina to the Gulf of Maine in the western Atlantic and on to the east they are found off the coast of Europe and in the Mediterranean Sea near North Africa. In the Pacific sand tiger sharks range from Australia to Japan and in the Indian Ocean they are found off the coast of South Africa.

Sand tiger sharks prefer surf zones, sandy shallow bays, and rocky coral reefs. They are often found at the bottom of the water column, near the floor and can dive to more than 625 feet. Because of season temperature changes in ocean water, sand tiger sharks migrate during the summer each year.

Diet
Like many shark species, this shark is an apex (top) predator. Their diet includes bony fish, lobsters, crabs, rays, squid, and smaller shark species. Sand tiger sharks are nocturnal and more active at night, hunting in groups. These hunting groups have been observed working collaboratively to "herd" fish together before attacking from all sides.

Celebrations
Even though this shark was historically fished commercially in North America, the implementation of the Atlantic Fishery Management Plan in 1997 gave the species full protection. Globally, there are regulations in place in limited regions around the Mediterranean Sea, eastern Australia, Europe and eastern United States.

Ironic?
While considered controversial, some believe that the growth in shark eco-tourism has actually positively impacted the public impression of sharks and therefore increased support for conservation efforts.

Concerns
The population numbers are not fully known, but the decline is. Although sand tiger sharks are fished across their wide range, for both commercial and recreational purposes, they are a species that is has high value in certain regions and cultural groups. They are valued as a food source (fresh, frozen, and dried) as well as for medicinal purposes. For example, sand tiger sharks have been hunted for just their fins, jaws, and teeth, leaving the rest of the shark to be discarded. Overfishing, unsustainable practices, and low birth rates have left this shark vulnerable to population decline.

A taxon is Vulnerable (VU) when the best available evidence indicates that it meets any of the criteria A to E for Vulnerable, and it is therefore considered to be facing a high risk of extinction in the wild.