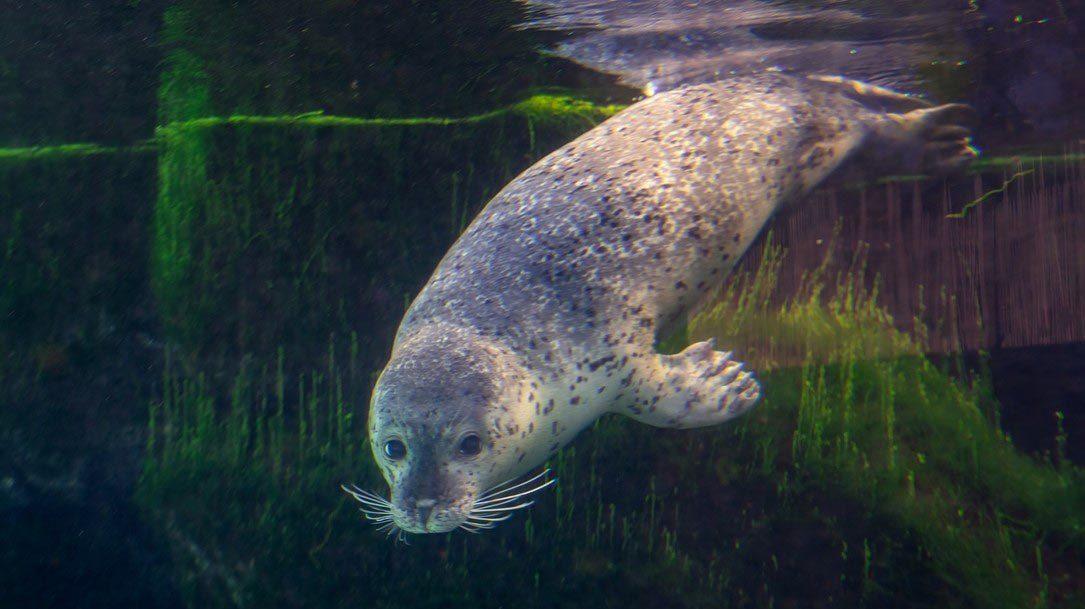 A favorite exhibit of our guests, with some of our most entertaining and adorable residents, is our Harbor Seal Exhibit just outside the Main Building. We invite you to sit and enjoy their “show” as they glide, spiral, and torpedo ever so gracefully through their habitat.

temperate, sub-arctic, and arctic waters with sandy or rocky coastlines

Harbor seals can display a wide variety of coat colors from silver and grey to dark brown, but most will have a pattern of dark rings or spots. While they appear overweight, these plump pinnipeds carry an important layer of fat called blubber. This fat insulates their body from the very cold waters in which they swim. Their front flippers also have structural similarities to the front limbs of land mammals. Unlike a related animal, the sea lion, harbor seals are considered “true seals” and do not possess external ears. Harbor seals have a “dog-like” head and v-shaped nostrils. Their dark “oily” eyes allow them to see underwater as they hunt for fish and other meals with limited sunlight.

People often confuse harbor seals with sea lions and fur seals, and though they are all pinnipeds, there are distinguishing characteristics. Below is a sample comparison between the Atlantic harbor seal and the California sea lion.

Did you know?
Harbor seals have five known sub-species and currently, we have two of the five here at the Aquarium: Phoca vitulina concolor and Phoca vitulina richardii. While the sub-species might have different coat colorations and ranges, they are all quite similar in other traits.

Reproductive Behavior
Like all mammals, harbor seals birth live young and nurse their offspring. Their breeding season is usually quite long, from February to October, and generally give birth to one pup between April and July. The gestation for these seals is 9 to 11 months and babies can weigh anywhere from 8 to 26lbs. at birth. Harbor seals are capable of swimming from birth but might be observed riding on mom’s back when they are tired. However, moms are not generally observed to have a strong bond after birth.

Locomotion
On land their locomotion aptly called “galumphing,” appears to be laborious and clumsy. However, when swimming, they can cut through the water like a torpedo, reaching speeds of 12 mph with the help of their strong hind flippers. They are capable of diving to more than 1640ft. and can stay underwater for almost 30 minutes!

Diet
Our resident seals reap the benefits of a restaurant-quality diet but seals that are not in human care feed on whatever fish happen to be available and in season. Their diet can be quite varied. In addition to fish, they feed on cephalopods and crustaceans found onshore and other small animals found in the water and crawling on the ocean floor.

Habitat
Harbor seals are one of the most widespread of the pinnipeds and are found throughout coastal waters north of the equator, from temperate to polar regions.

When onshore they prefer rocky reefs, sandy beaches, tidal mudflats, and sandbars along the coast, in bays, or estuaries where swaths of land are uncovered at low tide. They spend about half of their time on land and half in the water. They haul out of the water in the summer months when they shed their coats, and rest to regulate their body temperatures. Their iconic “banana” pose is suspected to be a temperature-regulating behavior.

Migration
At one-time harbor seals were considered non-migratory and typically thought to stay within 15 to 31 miles of where they were born. However, tracking data has revealed that they sometimes travel 62 to 486 miles from their tagging location, often to feed on seasonally-available food or to give birth.

Because of the thick blubber layers, harbor seals prefer colder water. Here in Virginia Beach, seals can be spotted off-shore from about December until May. However, as the water temperatures rise with the summer sun, they choose to migrate to the colder waters of the New England shores.

Celebrations
Harbor seals are one of the most common marine mammals along both US coastlines. Fortunately, this species is not currently a concern for conservationists, but this was not always the case. At one time they were considered a competitive nuisance for fishermen, so state-financed bounty hunting was allowed in some northern coastal states, but this practice ended in 1960. Today, like all marine mammals, harbor seals are protected under the Marine Mammal Protection Act.

Concerns
Some common threats to harbor seals include becoming entangled in fishing gear, ingesting marine debris, or being injured in a vessel strike. Seals are often mistreated by naïve beach visitors who try to feed, touch, or otherwise interact with the seals. Sadly, repeated exposure to humans can result in seals abandoning pups, illness, or stress. Harbor seal habitats are also being destroyed by irresponsible shoreline development as well as careless commercial and tourism practices.

Currently, we are fortunate to have three harbor seals with us, representing two of the 5 subspecies. They are all adorable and so much fun to just sit and watch. If you are fortunate to be visiting during a feeding session, you will surely be entertained as their caregivers run them through a training session. Be sure to ask questions. We love to talk about our work! 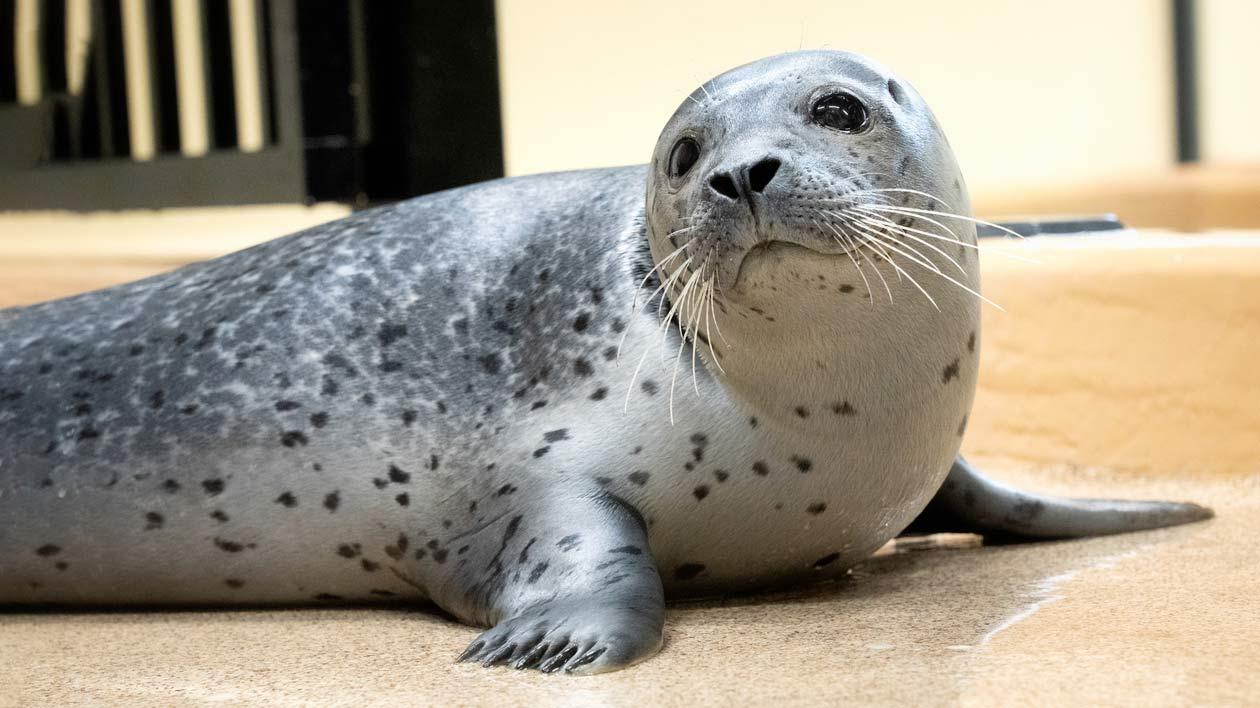 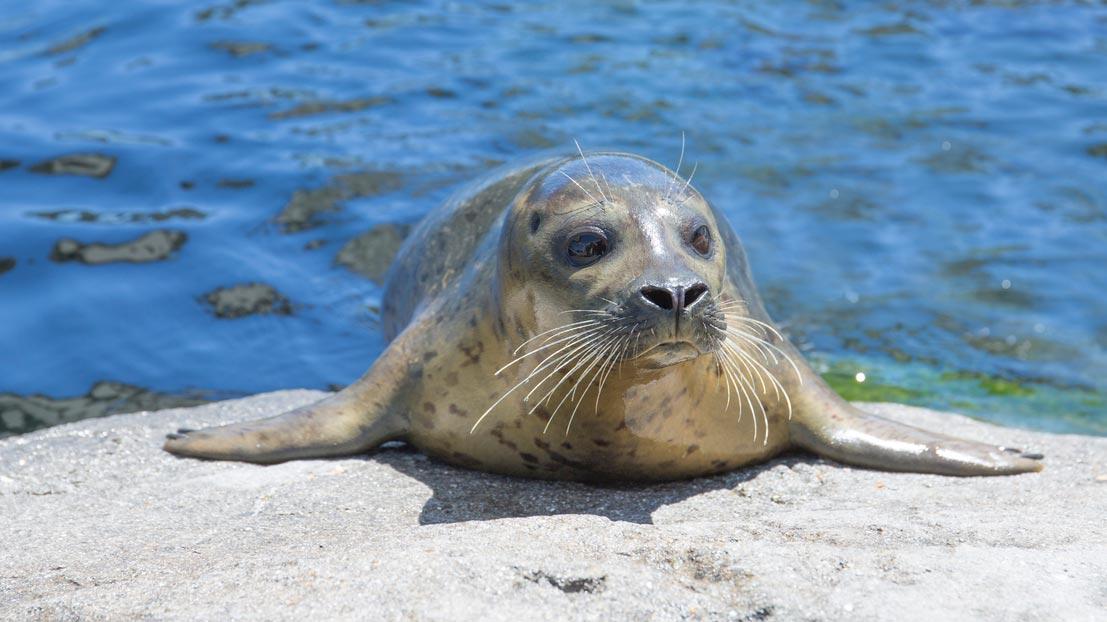 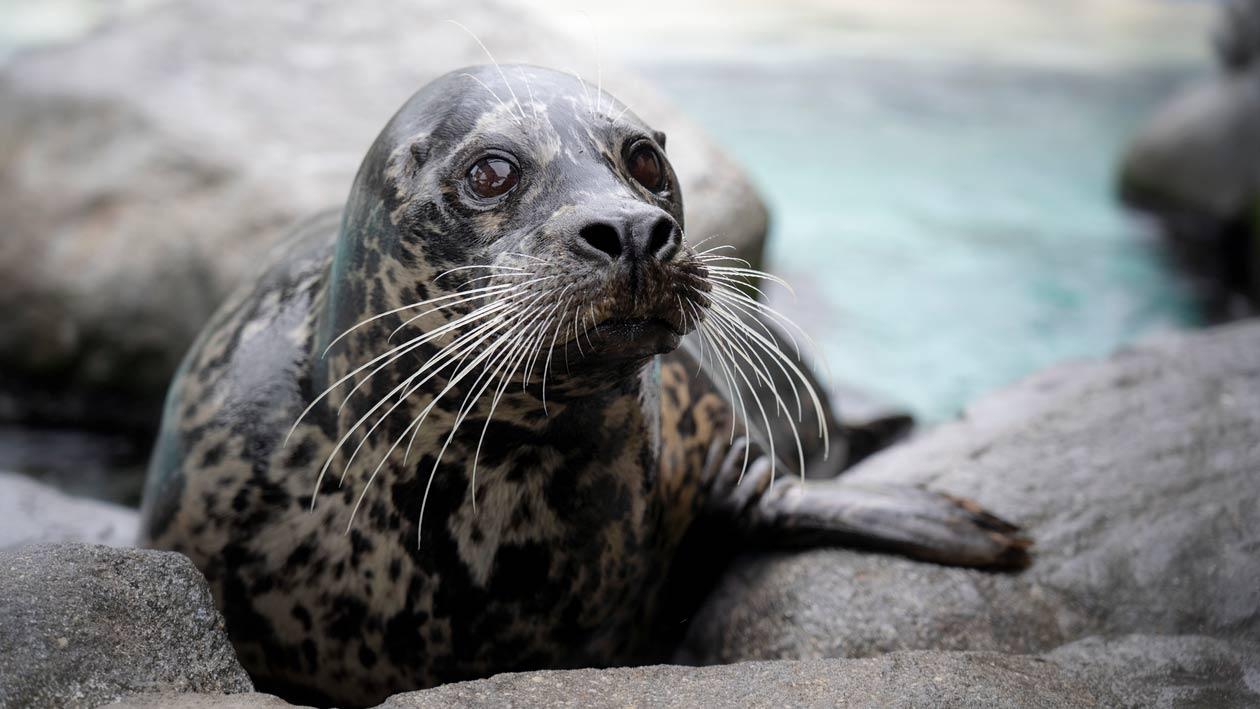 Please take some extra time to just sit and enjoy our resident seals. They are a true treasure to the Aquarium and community. If you are interested in a more intimate experience, be sure to watch our Behind-the-Scenes page for special behind-the-scenes tours.

A taxon is Least Concern (LC) when it has been evaluated against the Red List criteria and does not qualify for Critically Endangered, Endangered, Vulnerable, or Near Threatened.