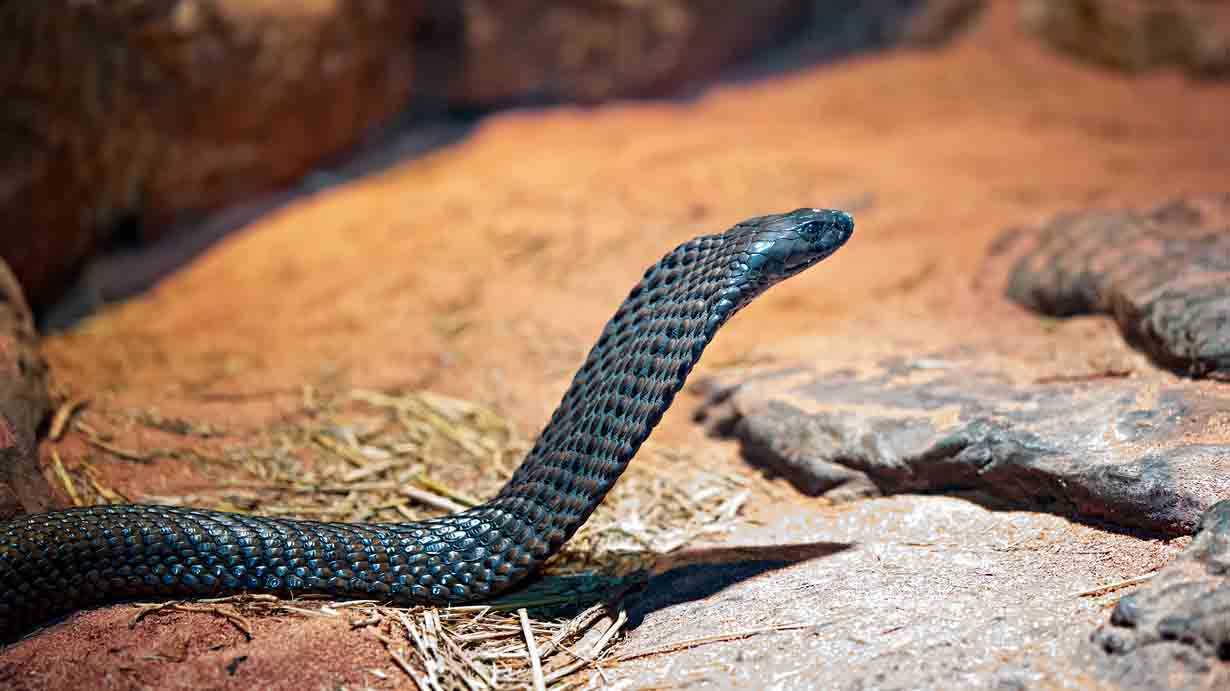 Like other cobras, the Egyptian cobra is recognized by its iconic hood-shaped neck that expands when the snake is threatened. Its long cervical ribs allow it to take on this intimidating posture, though usually, the snake will attempt to retreat first. While this species is found in varied colorations, most are a brown shade and display a tear-drop shape below the eyes. Some are copper-red or grey, and those from areas around Morocco and Western Sahara are almost entirely black. This snake averages in length from 3 to 7 feet but can reach 10 feet in length and weigh up to 20 pounds!

When threatened
Easily the most iconic trait of a cobra is its hood. When a cobra feels threatened it will first try to escape. If it feels trapped, however, the snake will raise the front part of its body and spread its neck. This behavior is an attempt to appear more intimidating and to acts as a warning to a potential threat.

Occasionally this snake plays "possum" when threatened by a predator like a mongoose, in hopes that it will be left alone. It will actually pretend to convulse and die.

Venom / Bite
If their hood makes them famous, it is because of the reputation of their bite. The Egyptian cobra is HIGHLY venomous and its bites are extremely dangerous. The venom contains neurotoxins (damage, destroy, or impair the functioning of the central and/or peripheral nervous system) and cytotoxins (kill cells). Unlike some species, the Egyptian cobra is not able to spit its venom, but with a bite that can kill an adult elephant in as little as three hours, they are responsible for many human fatalities across Africa. A bite will induce local responses like pain, blistering, bruising, swelling, and even necrosis. Bite victims may experience generalized symptoms including nausea, dizziness, headache, abdominal issues, and even convulsions. Thankfully antivenom has become increasingly available which has lowered the high human death rate considerably.

Snake Charming?
The practice of snake charming has long been practiced in Africa and South Asia and is an attraction for tourists still today. This species is a favorite because of its impressive wide hood, though it does not display the "eye spots" that can be seen on the Indian cobra (Naja naja). Contrary to what many think, the snake is quite docile and is not hypnotized by the charmer's music but does watch his movement closely. As tourists, however, it is important that we not support this entertainment as there are many questionable practices with regard to how the snakes are handled and cared for.

Reproductive Behavior
Like most snakes, they are oviparous and the females lay eggs. Their mating season is generally in the spring, running from late winter to the start of summer. About 50 to 70 days after mating the females will lay a clutch of anywhere from 8 to 33 eggs. The eggs incubate for 48 to 70 days and hatchlings that are only 8 to 12 inches long emerge able to survive independently.

Diet
These snakes are carnivorous and feed on small mammals, birds, eggs, and lizards. However, they seem to have a special affinity for toads. They are vital to ecological balance helping to keep dangerous pest and rodent populations in check. These snakes are mainly nocturnal, often foraging at night. However, they are also seen basking in the sun in the early morning. They find shelter in abandoned animal burrows, termite mounds, or rock outcrops.

Habitat
Egyptian cobras are found widespread across much of North Africa, above the Sahara Desert, across west Africa, south of the Sahara, and east to Kenya and Tanzania. They thrive in a variety of habitats including dry to moist savannas, arid, semi-desert regions where water and vegetation can be found, and in human settlements with easy access to food sources like domestic chickens or rodents (rats). There are even reports of them entering homes on occasion.

Celebrations
Little information is known about major threats to the Egyptian cobra. The species is widespread and highly adaptable so is likely subject only to local threats from poachers, habitat destruction, or pesticide use. Currently, the IUCN has categorized the Egyptian cobra as Least Concern. However, conservationists are closely monitoring population decreases in northern Africa, particularly in Egypt.

Speaking of Egypt
The Egyptian cobra was once a prized animal in ancient Egyptian culture. They were believed to be a symbol of the power for pharaohs and were the symbol of divine authority, royalty, deity, and sovereignty. The golden mask of Tutankhamen contains an idol of the Egyptian cobra known as the Uraeus. It is also believed that what is translated as “asp” in the story around Cleopatra’s famous death might actually have been an Egyptian cobra. Asp is a general term used for venomous snakes found in the Nile River region.

Concerns
The Egyptian cobra populations are declining and in some cases disappearing across much of its range. This is happening primarily to over-collection as well as loss of habitat. Humans are the most common predator as skins are prized in the exotic leather trade and even common in the exotic pet markets. Additionally, cobras are drawn to human establishments and villages where meals of rodents can easily be found and unfortunately, are often killed on sight. Rural farmers killing out of fear, the unsustainable collection of cobras for antivenom production, and meeting tourist demands are also major threats. 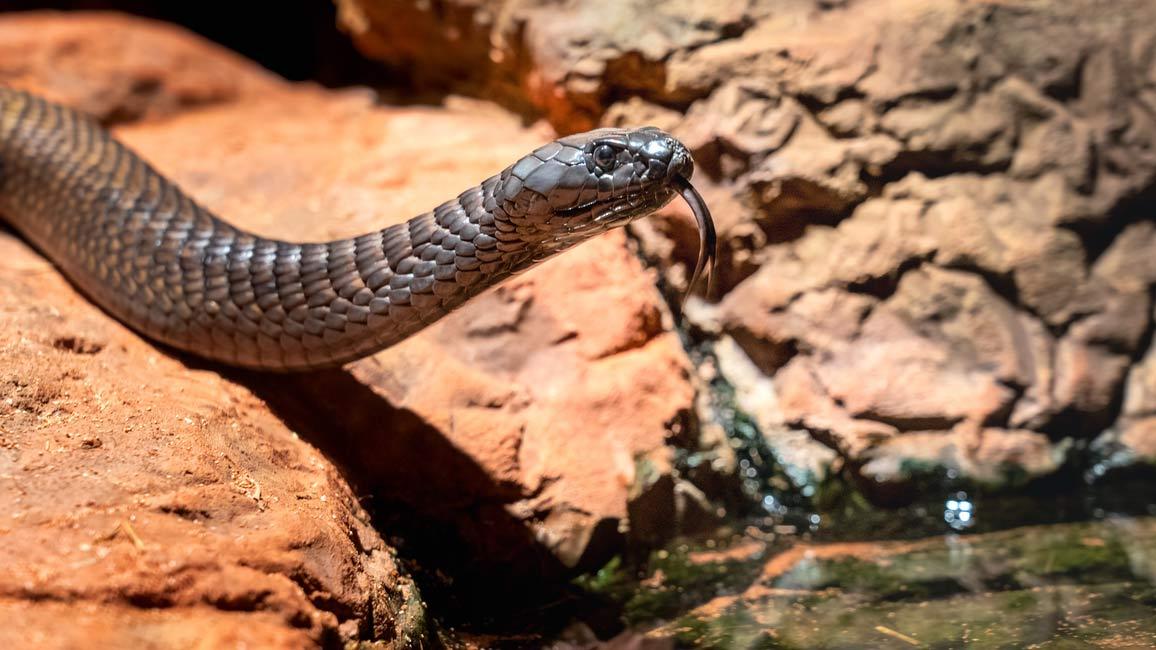 Please visit our resident Egyptian cobra who can be found in the Restless Planet.

A taxon is Least Concern (LC) when it has been evaluated against the Red List criteria and does not qualify for Critically Endangered, Endangered, Vulnerable, or Near Threatened.