This birthday boy is an athlete, a dancer, and beyond adorable.

He is an athlete, with swimming speeds exceeding top Olympic swimmers. He is a dancer, though he often demonstrates his “art” in an unusual restroom behavior.* He is beyond adorable, and the photos speak for themselves. Definitely one of the favorite residents here at the Aquarium, we hope he will soon make his grand re-appearance with the opening of our new South Building. Any guesses?

I am talking about Sheldon, one of our male North American river otters (Lontra canadensis) and the birthday boy! Sheldon was born to make hearts melt from day one of his life, so it makes sense that we celebrate his birthday near Valentine’s Day each year.

When he was but a week old, Sheldon was discovered orphaned and near death. An individual with a nonprofit organization dedicated to rescuing, rehabilitating, and releasing orphaned and injured mammalian wildlife, stumbled upon his tiny little body. Mothers will sometimes leave pups behind if they have too many to look after, which appeared to be the case for little Sheldon. The wildlife rehabilitator was able to nurse him back to health. However, because he had been in human care and become reliant on his caregiver, it was not safe for the little otter to be released. A forever home was needed, and the Virginia Aquarium was chosen! 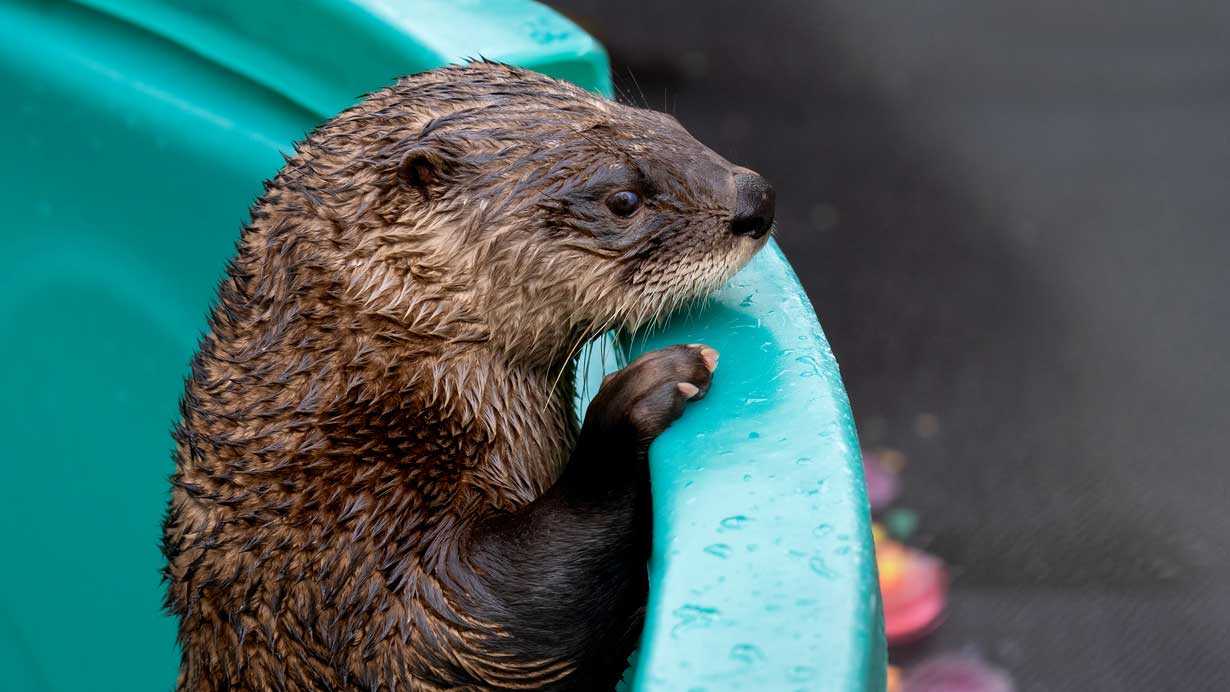 On May 21, 2012, after traveling for seven hours, this 6-pound, 4-month old ball of fur arrived to an eagerly awaiting Virginia Aquarium Mammal Staff. Soon after, the Aquarium hosted a naming contest and he has since been known as Sheldon.

From the moment he arrived, we (the animal care staff) have worked with Sheldon on behavioral training. Because he was already somewhat comfortable with humans, we were able to work with and train him without a barrier between us. We taught him a foundational husbandry behavior called “stationing” where the animal learns to go to a designated area and wait for further cues. Target training, where Sheldon learned to touch a specific object when asked, has helped build his confidence and acted as a bridge for learning other behaviors. He is currently working on retrieving toys that are placed around his exhibit.

We continually work with him on several husbandry behaviors that are important to providing him with exceptional care. Sheldon has successfully learned, through body tactile training, to accept physical exams and health assessments. More recently he has learned to open his mouth when given a specific cue, allowing us to inspect all of his 36 teeth without the stress that many of us humans feel when we must visit the dentist. 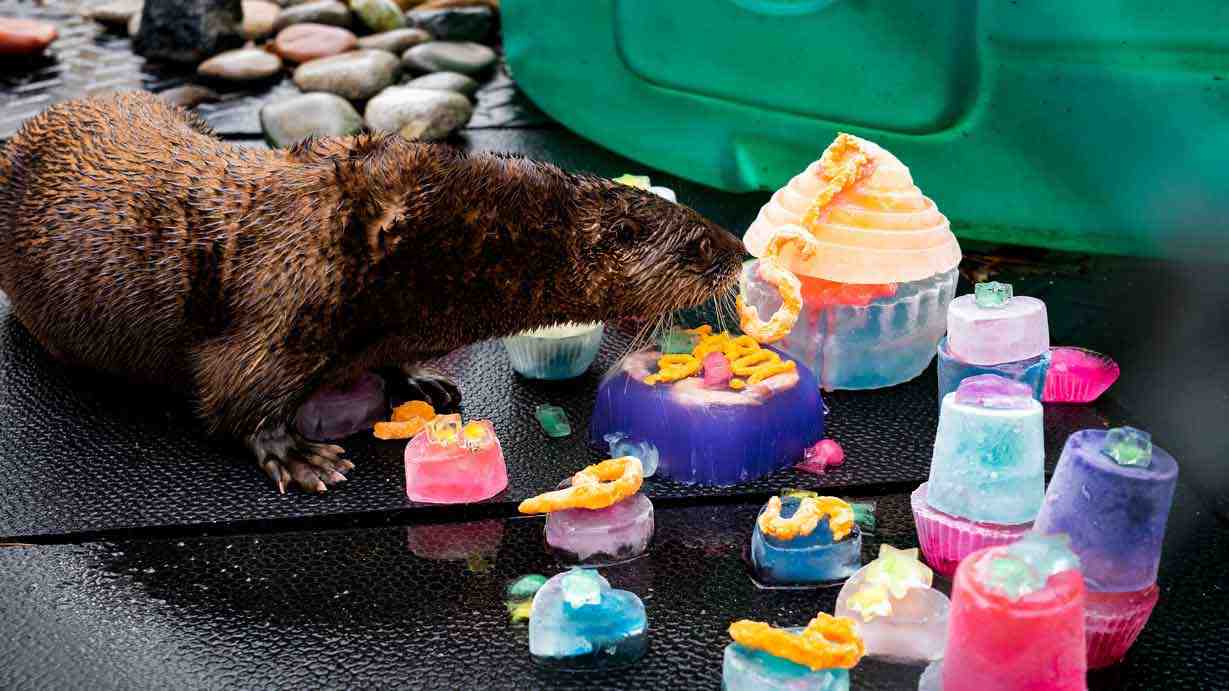 There are some behaviors, like swimming, that young otters learn by mimicking their mothers. Because Sheldon didn’t have his mom, we had to teach him how to swim. At first, we started working with him in a small bin of water but as he progressed and gained confidence, we moved him into the larger holding pool. Just like working with a human child who is learning to swim, we constantly supervised Sheldon and waded with him in the pool, until he was comfortable swimming on his own. After he turned a year old, we introduced him to Homer and Tippy, the Aquarium’s other otters.

There are several ways that he is distinguishable from Tippy and Homer. Sheldon’s trainers can identify him from the shape of his nose, because otter noses are as unique as human fingerprints. The largest and darkest otter at the Aquarium, Sheldon is energetic, playful, and inquisitive.

Enrichment is provided for the otters in various forms to keep their minds sharp. A favorite enrichment we enjoy offering is ice. The boys will dig, bury, roll, and chew on it. We even add some of their favorite foods to these frozen “toys.”
Otters eat a variety of foods including fish, turtles, and small mammals. The otters at the Virginia Aquarium are fed a diet of small fish like capelin and smelt, as well as other meat like chicken and mice. In addition to their regular menu, the boys are also given special foods as enrichment. Sheldon gets especially excited about eating crayfish, shrimp, and even carrots.

So, this year, the once tiny, 6-pound little Sheldon, now twenty pounds heavier, will be turning 9 years old. We have enjoyed every moment with him and look forward to our guests visiting him once again when the South Building opens and reveals their habitat renovations. Be sure to keep watch for announcements about our opening. Sheldon, and his habitat mates are waiting. Who knows, maybe you will be lucky enough to witness their unique, but pretty cool, “poop dance.” 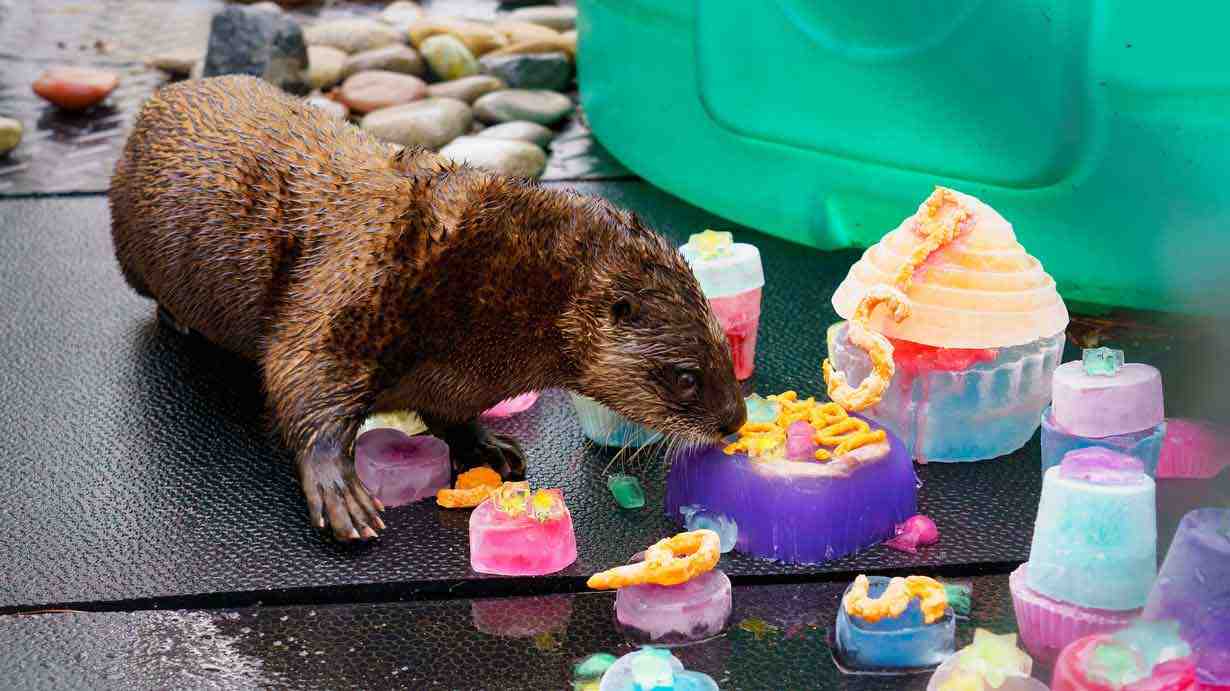 Be sure to visit us soon! There is so much to do right now at the Virginia Aquarium & Marine Science Center. Reserve your visit and purchase tickets today!

*Unique facts about the North American river otters alluded to in this post and more: 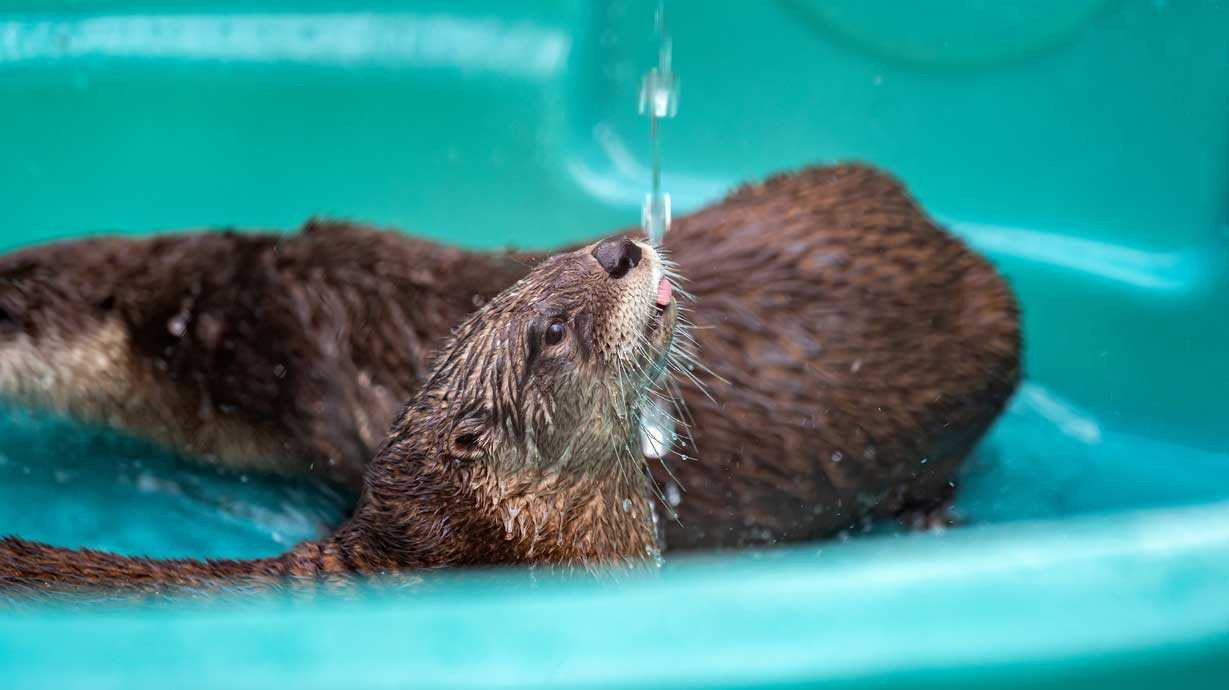 Changes are coming to the Virginia Aquarium!

But What About the Otters?

​What's happening with the otters during the closure…